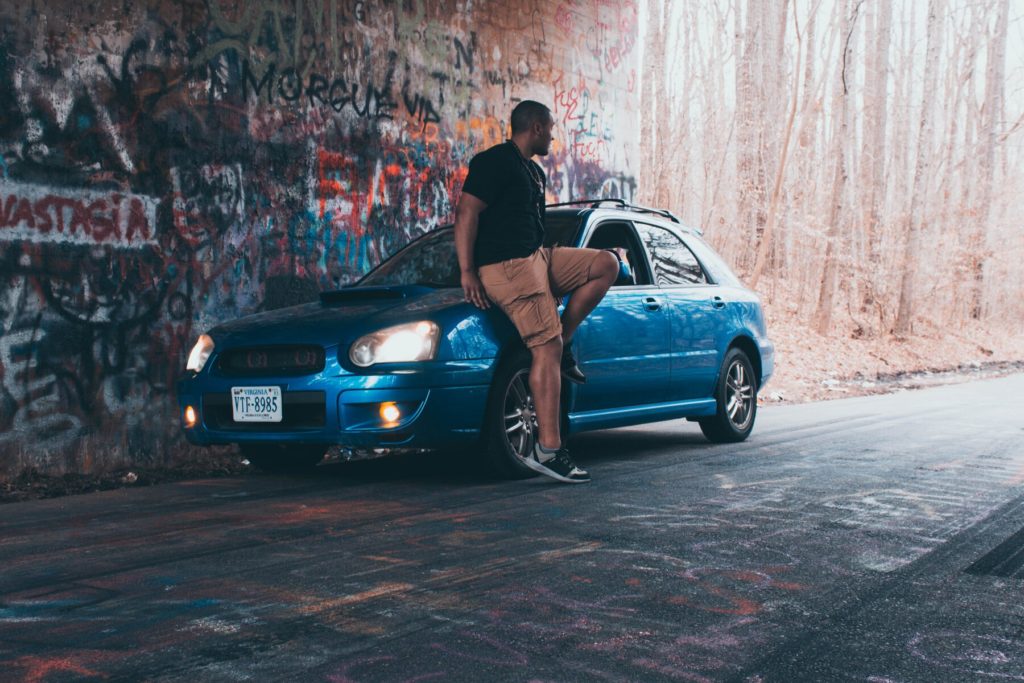 Subaru owners can range from the outdoorsy hiking and camping type, to the WRX and STI motorsport and tuning enthusiast type, but we all have one thing in common. We love our Subarus, and a Subaru t-shirt is the perfect way to show that to the world. We've compiled a list of our favorite Subaru t-shirts, and we think you'll like them just as much as we do.

The Subaru WRX has gone through many styling changes over the years, but it always has kept the main elements that make it look like a WRX. This Subaru t-shirt shows off the striking designs of each generation of the WRX, perfect for any fan or owner of the car.

This official shirt from Subaru is simple and to the point, a black t-shirt with the Subaru logo. Perfect for someone who doesn't like overly flashy graphics on their clothing, and perfect for any Subaru owner, whether you drive a WRX, an Outback, a Crosstrek, a Forester, or an Impreza.

This blue variation of the basic Subaru t-shirt is a great simple way to show your loyalty to Subaru. The blue is similar to Subaru's famous World Rally Blue that gained its popularity with Subaru's rally racing.

This genuine t-shirt from Subaru features the STI logo on a simple black t-shirt. If you love Subaru and the WRX STI, but you aren't a fan of complicated and flashy designs, this may be the perfect shirt for you.

With Subaru's amazing symmetrical all-wheel-drive system, they really are the best do anything, go anywhere car. Any Subaru owner will praise their car as the perfect adventuring machine. This t-shirt is perfect for the Subaru lover who loves going on road trips and adventures.

For when it's hella mild outside, you're gonna want something to keep your arms warm. This genuine long sleeve t-shirt from Subaru features their Rally Team USA logo in large print.

It's not just love that makes Subaru a Subaru. It's also the heart of their cars, the boxer engine. Subaru's boxer engines give the car a lower center of gravity for better handling, and they have a recognizable sound, making a Subaru unique from most other cars. This Subaru t-shirt is perfect for any Subaru loving car nerd.

This funny t-shirt is perfect for the Subaru WRX, WRX STI, or Forester XT owner. Anyone who drives a modified turbo Subaru loves to step on the gas and hear the engine open up, and loves the sound of the blow-off-value as they shift between gears.

"The World is Flat" T-Shirt

This humorous t-shirt gives Subaru's boxer engine some rightful praise. Also known as a "flat" engine layout, Subaru's unique engine design is shared by only some Porches. The Subaru boxer engine is part of what makes a Subaru a Subaru, other than love, of course.

The Subaru WRX STI is one of the most well known Japanese performance cars. This t-shirt shows off the blob-eye STI's aggressive stance and lines, something any JDM car lover will appreciate. The simple line drawing style perfectly highlights the styling of the STI.

This Subaru t-shirt features the 2015+ WRX, otherwise known as VA chassis. The classic World Rally Blue, combined with the huge wing, widebody, and stance of this WRX make for an aggressive, fast looking ride. If you love the WRX, and think modifying it makes it even better, we think you'll love this t-shirt.

When your WRX is life, this t-shirt will help you show it. Available in a variety of colors: black, navy, royal blue, cranberry, and purple, this t-shirt can match your style preferences, and show off your love for the Subaru WRX.

This t-shirt features the front end of the 2015-2017 Subaru WRX in World Rally Blue. The black background and headlights make it seem as if the car is coming from the darkness, and keep the design stylish and simple.

The bug-eye WRX has one of the most iconic and unique designs of all WRX generations. This t-shirt features its front end in a simple line-art style. If Subaru is your life, you'll know and appreciate the bug-eye WRX very well, and we think you'll appreciate it on this t-shirt.

"All I Care About Is My Subie" T-Shirt

"All I Care About Is My Subie, and Like Maybe 3 People," this t-shirt proclaims. We're sure many people can relate to this. If you own a Subaru, we know you probably do care more about it than most people. Don't lie.

This t-shirt features a detailed drawing of the Subaru boxer engine's inner workings. If you're a car nerd who loves Subaru, you'll know all about the boxer engine and what makes it special. This t-shirt gives you an excuse to enlighten the world.

The tyrannosaurus rex was a powerful beast. What does the WRX run on? Dinosaur juice, so tell me who's more of a beast now? Subaru says WRX means "world rally experimental," but we know it stands for T-WRX.

Drivin' around downtown, booSTIn loud, and I'm speeding. There's a lot of reason to love the Subaru WRX STI, but boost is one of the biggest. Not only does forcing air into the engine make you go fast, but it makes some really cool sounds.

Best Subaru WRX Shift Knobs
# subaru
ThinkTuning is a blog dedicated to car enthusiasts who love modifying, tuning, racing, and just driving their cars. We have guides and reviews for the top modifications you can purchase to make your car better and faster. We feature guides on car modification and buying the right mods, and car culture. We have car mod guides for the Subaru WRX and WRX STI, Subaru BRZ and Toyota 86, with more to come. We’ve noticed that it’s challenging to find all the information you need when modifying your car, so we’ve decided to try and collect, and combined with experience, make it easy car enthusiasts to modify and tune their own cars.