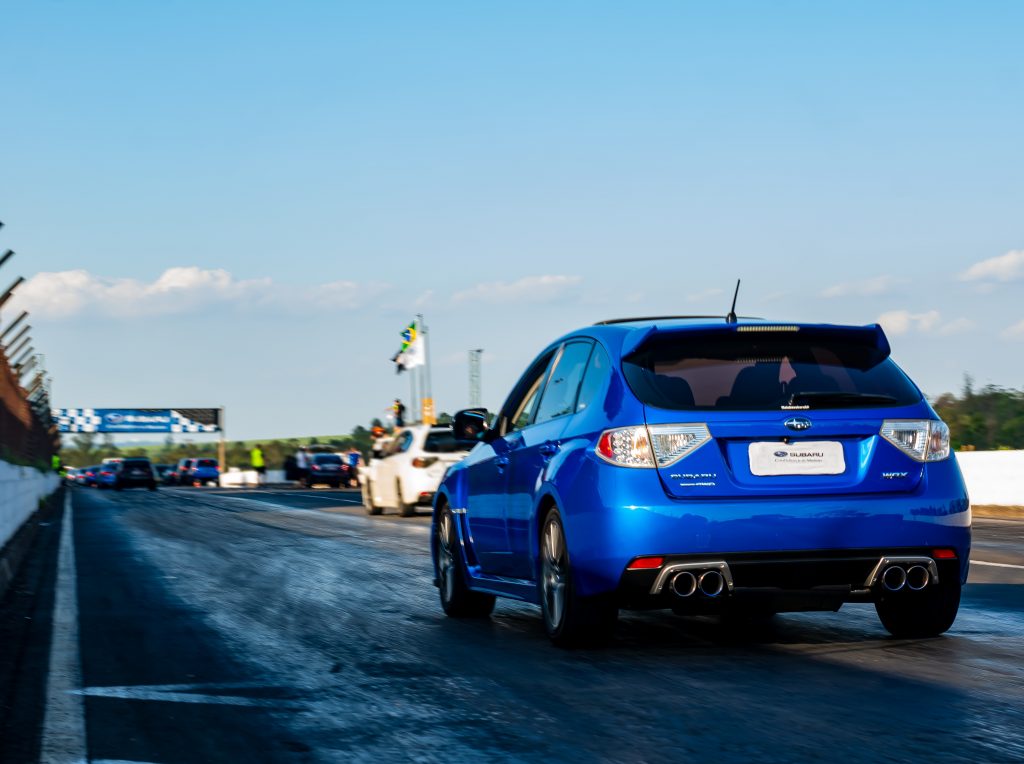 Many of us buy cars thinking "I'll just keep it stock." Yeah, right! Once you start researching, all of this lingo and these acronyms can be very confusing. EBCS, TGV deletes, and J pipe? What do these parts do? Stage 1? Stage 2? AccessPort? What do all of the WRX stages mean?

Where do you start with all of this when you just want to make your Subaru WRX faster? What do the different stages mean, and much power do they add? We hope to clear things up for you and help you get started.

The simplest of the stages for the Subaru WRX is stage 1. Stage 1 just means you've flashed a tune. If you have a newer model, your only option to do this is using a Cobb AccessPort.

The AccessPort comes preloaded with tunes for the various stages. It simply plugs into the OBD-II port under your dash, and with the press of a few buttons, your car will be Stage 1 in a few minutes.

Another big change with a stage 1 tune is that it fixes rev hand. On 2015+ WRXs, many people complain of "rev hang", where the RPMs will take too long to drop shifting between gears. Stage 1 tunes will also fix this, making the car overall much smoother and easier to drive.

If you want to start modding your car, buying a Cobb AccessPort is a great place to start, and you'll need it to tune your car for any further physical modifications such as the intake and downpipe. The AccessPort costs around $650 new, but you can get one used for much cheaper. Just make sure that it's unmarried, or fully uninstalled from the previous car, you can't use it.

In terms of powered added, Stage 1+ isn't a big jump from Stage 1. The difference is that an intake is added. With the 2015+ Subaru WRX, the stock intake isn't very restrictive, and while an aftermarket one main give some small gains, it's small compared to the jump from stock to stage 1, or from stage 1 to stage 2.

Some additional tuning is required to keep the car running correctly when installing any intake. The car senses how much air is coming in with a MAF (mass airflow sensor) so it can determine how much fuel to inject.

When the intake is modified, this will change the readings from the MAF, so some adjustments need to be made. Stage 1+ might add a bit more power over Stage 1, but the biggest change you'll notice is more sound from the intake. You'll hear the turbo spool up and hear blow-off sounds.

Many intakes for the Subaru WRX will have off-the-shelf tunes available, such as the Cobb Big SF intake and Mishimoto Performance Intake. You can simply flash these tunes with your AccessPort, without having a custom tune made for your car.

Stage 2 takes things a step further in terms of power added, with some WRX owners gaining 70 whp or more from the stock car's power. For a Stage 2 tune, you'll need to install a j-pipe, otherwise known as a downpipe. The J-pipe is the section of exhaust that comes directly out of the turbo, has the catalytic converters, and connects to the rest of the exhaust.

The j-pipe is the most restrictive section of the exhaust, so replacing it allows for substantially more airflow and power gains. Replacing the downpipe and going Stage 2 also will require additional tuning. Fortunately, the AccessPort also includes off-the-shelf Stage 2 tunes.

Many people also install a catback exhaust system and intake at this stage, but this isn't necessary. While there's some extra power to be gained here with the work of a good tuner, it's mostly the j-pipe that will bring you extra power.

This is where things start to get more ambiguous. Stage 2+ can mean Stage 2 with an intake, with the required tuning, of course. Some people will add more mods from here, such as TGV (turbine generator valve) deletes, EGR (exhaust gas recirculation) deletes, catch cans, or an EBCS and refer to it as Stage 2 or Stage 2+.

After stage 2, it's common to install a flex fuel kit for even further gains. Normally people would simply call that "stage 2 with flex fuel" for example, rather than it being a stage of its own.

The point at which it becomes Stage 3 isn't fully agreed upon, but up next, we'll explain what people usually mean when they say Stage 3.

At least one company, GrimSpeed, is selling a Stage 3 kit for the 2015+ Subaru WRX. GrimSpeed's Stage 3 kit includes an intake and j-pipe, which alone would either be Stage 2 or 2+ depending on who you ask, as well as an intercooler, charge pipe and electronic boost controller (EBCS).

Other common mods people install at this level include TGV and EGR deletes, just like stage 2. Stage 3 isn't a widely used term, but these extra parts can have some big power increases. Some people report similar gains from these mods as adding an aftermarket j-pipe alone.

While it's difficult to define all of the WRX stages past stage 2, there are still some general guidelines. Generally, the different staged kits for the WRX from different companies are about the same in terms of power added and parts included, but it's common to piece together your own kit, often including parts from many different companies. We hope this guide helped to clear things up and help you understand the different WRX stages.

The AccessPort is a tuning device that Cobb makes for many turbocharged cars, including the WRX. It plugs into your car's OBDII port and flashes tunes to the car's ECU. It includes some preloaded tunes for specific parts, known as OTS or off-the-shelf tunes, but professional tuners can also create custom tunes using Cobb's software.

Custom tunes are known as e-tunes when done by email, sending data logs and tune files back and forth until the tune is ready. Dyno tunes, or pro tunes, take it a step further, and your car is put on a dyno where the tuner can work with it in person.

What are TGV deletes?

TGV deletes, otherwise known as tumble generator values, are a part of the car that sits on top of the intake manifold. The TGVs have butterfly valves inside and controlled by the ECU. They open and close, allegedly to "tumble" the air as it flows into the engine, which is meant to help increase efficiency under certain conditions, mostly during startup.

However, even though these values may be fully open during heavy acceleration, they still cause some restriction. TGV deletes replace the stock part with one that has no valves, and the ECU is tuned to ignore them. This frees up restriction in the intake, allowing for more airflow and more power.

What is an EGR delete?

EGR deletes remove the stock exhaust gas circulation system. The EGR system pipes some exhaust gas back into the intake. Its purpose is to decrease emissions. It works by diluting the oxygen in the combustion chamber and allowing these exhaust gases to absorb some heat. This has the effect of reducing N02 emissions.

The EGR system not only can reduce the power output of your car, since injecting these exhaust gasses it effectively reducing your displacement, but can gunk things up in your engine. For direct-injected engines in particular, like the FA20DIT found in the 2015+ WRX, it can cause your intake valves to build up carbon deposits. It's a problem with direct-injected engines, since there's no fuel flowing over the valves, helping to clean them.

An EBCS is an electronic boost controller. A boost controller prevents the car from building too much boost, keeping it at a specific target set in the ECU. It works by controlling the turbo's wastegate, allowing exhaust gasses to bypass the turbo, preventing it from spooling and creating more boost.

While the WRX includes an electronic boost controller from the factory, aftermarket ones allow for a higher degree of control. By installing an aftermarket EBCS, a tuner can eliminate boost spikes that the factory part just can't keep up with.

Best Subaru T-Shirts
# subaru# subaru wrx
ThinkTuning is a blog dedicated to car enthusiasts who love modifying, tuning, racing, and just driving their cars. We have guides and reviews for the top modifications you can purchase to make your car better and faster. We feature guides on car modification and buying the right mods, and car culture. We have car mod guides for the Subaru WRX and WRX STI, Subaru BRZ and Toyota 86, with more to come. We’ve noticed that it’s challenging to find all the information you need when modifying your car, so we’ve decided to try and collect, and combined with experience, make it easy car enthusiasts to modify and tune their own cars.